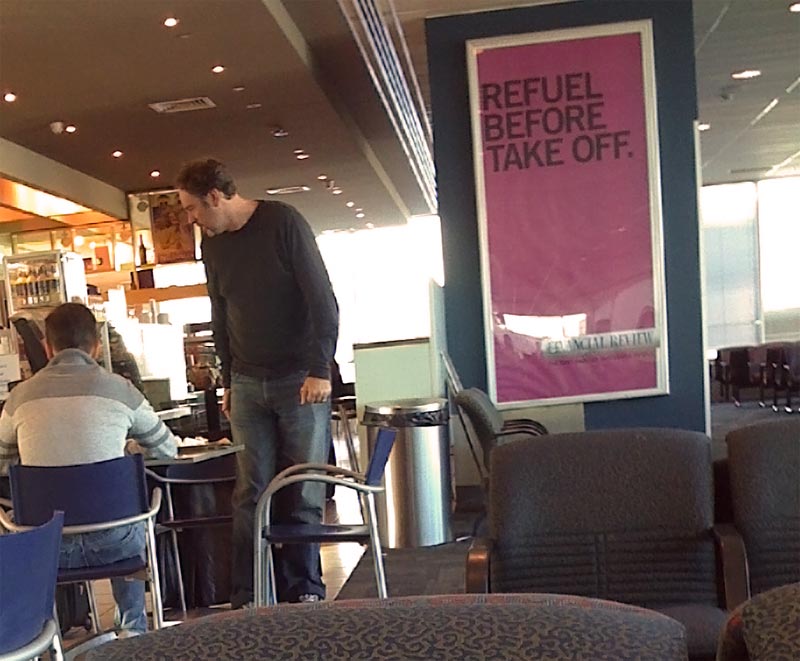 15 Oct What Hope a Decent Brew?

“Go to the French cafe by the departure gate. It’s got really good coffee, and sandwiches too.”

Dressed like a character from a Jack Kerouac novel, a connoisseur of places subterranean, my friend knows his coffee, and the city he lives in does too. Forget paired and halved slices of bread, I have been in Melbourne three days, Australia’s second city and first city of art, culture and coffee—soon to be largest city by upwards trend of statistical metric—and sandwiched in an airport coffee lounge queue, post check-in and pre board-on, I am going to steam it, pour it, drink it one last time, order it extra strength in a double sized cup.

Not the size of the queue but the position, the opposite side of the food cabinet, the opposite side of common sense. Till and people queuing to the right; food, barista and people waiting for coffee to the left—this café expected people to queue, order and pay for food that they could not see, and such little touches nay blindly splayed brush strokes on the canvas of life suggest a business run without a clue. What hope then a decent brew?

“Hi, do you have any sandwiches that are vegetarian?”

At the head of the queue, face to face with girl taking my order, I had to ask for a recital of the food cabinet contents that could not be sighted.

I had left the carry-on bag to briefcase packed queue to inspect the uninspiring, un-kosher selection of ham and cheese condiments earlier, losing my place in doing so to a pair of airline pilots, accustomed on ground as in air to being in front of everybody else, but hope against hope, thought it worth asking if something, anything solid might be joining my liquid, caffeinated must.

In life hope is a welcome, cheerful friend, but disappointment a more consistent companion. Preferred company unavailable, the girl behind the counter answered my question with a lack of understanding bordering confusion, and with no small effort, shifted sideways to double check what comprehension could not. Unwillingness, written on face in letters larger than the blackboard behind, remained firmly in place.

And then silence. No other suggestions forthcoming, even half-consideration a cup drained bare. She shifted back, impatience joined us for company.

“Then could I have a croissant?”

Although chalked in white and capitals on the menu one row below “obvious”, this request may have been confusing too, because the girl, furrowed brow, tangled thinking as apparent as gaudy lipstick, queried that which common sense and opening question had already answered.

“Did you want the ham croissant?”

Something other than the croissant in this cafe appeared to be served plain.

I am well used to this sort of treatment. I have been swimming vegetarian in a stream of meat-eaters for fifteen years, and am not the kind of person who paints the entire world white just because it is the colour I’ve chosen to wear. Callousness and deliberate unwillingness though are harder to swallow.

Perhaps the “croissant toasted with butter and jam” description of the menu was optional, perhaps for me only imaginary, for I was handed a “plain”, room-temperature croissant, sans condiments and toasting in a white paper bag. The only thing toasted about this croissant was my starting to burn at the edges temper.

“I’ll have a mocha too” I added in measured, deliberate tone as total was added, note proffered, change returned, no recognition of my request shown other than correct price charged.

Taking croissant in hand, taking bad with bad, I moved to the opposite side of queue and counter willingly, with relief, to the barista and coffee machine, where two shots of heart-palpitating happiness would be made. Things were looking up, my welcome, cheerful friend returned, hope a half full growing fuller coffee cup.

About eighteen, about eighteen years away from mastering his trade, the barista emptied coffee grind from the previous shot with a rushed, hasty jolt, then returned handle to head without cleaning it.

Live long enough, pay attention to memory and intuition close enough, practise meditation well enough, you get a foretaste, premonition of the outcome of every action before you act. I could taste the coffee being made as though already drinking it, and it tasted dirty, gritty, acidic, as though drinking from the bottom of a used, uncleaned mug.

On second thought, but thought too late, my well-meaning, well-discerning friend had said to go to the French cafe by the departure gate, and the only thing French about this café were the stale croissants, baked so long ago that they could have been shipped from Paris.

The clock struck boarding time, the airport announcer chimed, I made my way past duty free stores and just free, just arrived passengers to Gate 24. With a queue for coffee almost as long as passengers boarding the plane, the café I should have gone to was literally next door.