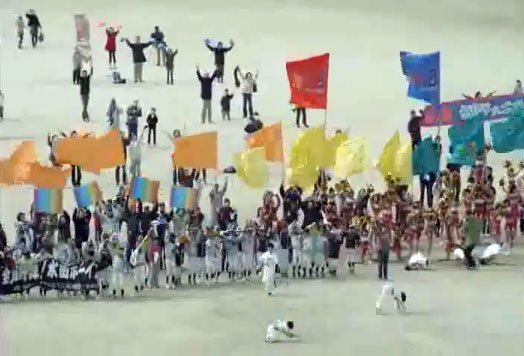 17 May Wave of Beautiful Humanity

mundaneusername: tearing up. Thank you.
koy1: why did i cry when i saw this?
mundaneusername: Because it shows you what we can be like.
ioduae: As silly as it is, it makes me feel a little better about humanity right now.
Comments from Reddit.com

When Japan Rail filmed a commercial for their new Kyushu Skinkansen—a bullet train linking the southern-most island of Japan for the first time—all the marketing savvy in the world could not have predicted that it would first air the very day after the greatest earthquake and tsunami in Japanese history.

With the entire nation reeling in disbelief, and out of sympathy for the victims, the bubbly, rainbow-filled 180-seconds-of-celebration was immediately pulled from the air. There can be nobody in the world who by now does not know why.

The earthquake and resulting tsunami left an unimaginably devastating toll: 15,057 people dead, 5,282 injured, 9,121 missing, and its force was enough to move not only the island of Honshu 2.4 metres, but the axis of the entire planet. With the eventual cost estimated to exceed $300 billion, it will be the most expensive natural disaster on record.

But what price to put on happiness?

After a month of near endless, unbearable news, not the least of which was the full-blown nuclear disaster in Fukushima, Japan Rail choose to quietly return its Southern Line commercial to air. Beyond all expectation, it became an immediate, nationwide phenomenon. Viewers all across Japan literally shed tears of joy at the sight of an island-long, 15,000-person human-wave, and the advertisement quickly achieved something priceless—it made a grieving nation happy.

With possibly the catchiest, Björk-esque J-Pop soundtrack ever by Japanese-Swedish artist Maia Hirasawa, a rainbow-clothed cast of thousands is shown staging spontaneous, unscripted acts of joy as the rainbow-painted train passes with film-crew on board. Far from being inappropriate, the unabashedly happy commercial proved to be unerringly appropriate, uplifting spirits and warming hearts the length of Japan.

Wrote one grateful viewer from Fukushima itself, “I heard this commercial has been pulled off air after the earthquake. They shouldn’t have! It’s good to see so many smiling people, and the united power of a great country like Japan working together for a common purpose. This is a huge encouragement to people working for the reconstruction. Thank you!”