09 Sep The Most Shocking Ending in All Literature

“How oddly situated a man is apt to find himself at the age of thirty-eight! His youth belongs to the distant past. Yet the period of memory beginning with the end of youth and extending to the present has left him not a single vivid impression. And therefore he persists in feeling that nothing more than a fragile barrier separates him from his youth. He is forever hearing with the utmost clarity the sounds of this neighboring domain, but there is no way to penetrate the barrier.”
–Yukio  Mishima

A Biography of Author Yukio Mishima 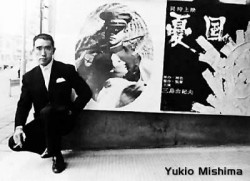 Three times nominated for the Nobel Prize in Literature, Yukio Mishima is considered the most important Japanese novelist of the twentieth century, and until the arrival in more recent times of Murakami Haruki and Yoshimoto Banana, was the writer with the largest readership outside Japan.

Extremely prolific despite a comparatively short life, he produced forty novels, at least twenty books of essays, poetry, eighteen plays—including modern Kabuki and Noh dramas, some of which he also acted in—and one libretto. He was an astute critic—his talent rated higher by some than his fiction—and appeared in four films as an actor of some ability, one of which he also directed and produced. Mishima was considered to be the only author of his time talented enough to write Kabuki plays in the traditional manner; a professor from Kyoto University described him as a man of “frightening talent.”

Born Kimitaké Hiraoka, he was seized from his parents and raised by his Grandmother, the only one of the family of samurai descent, who both instilled in her grandson a love of literature, and according to some biographers, sickness and neuroses. Many trace his literary themes and later actions to these early, difficult beginnings.

At sixteen he assumed the pen name Yukio Mishima, a move alternatively explained as hiding his writing from an anti-literary father and hiding his true age. Yukio comes from the word yuki, which means snow, and Mishima is a town known for its view of the snowy peaks of Mt. Fuji.

Mishima avoided being conscripted by the army during World War II after being falsely diagnosed with pleurisy. While a student of law at Tokyo Imperial University he published his first collection of short stories, and the following year in 1944 published his first major work, The Forest in Full Bloom, a great achievement for any Japanese writer as few books were being published during the war. The first edition of 4000 copies sold out within a week.

All of his novels contain paradoxes: beauty contrasted with violence and death; the yearning for love and its rejection when offered; the dichotomy between traditional Japanese values and the spiritual barrenness of contemporary life; paradoxes he himself embodied—his writing was in all cases semi-autobigraphical, sometimes fully.

Mishima’s best known works include the autobiographical Confessions of a Mask, The Temple of the Golden Pavilion and the tetralogy The Sea of Fertility, regarded by many as his most lasting achievement—he sent the final volume to his publisher on the day of his suicide. 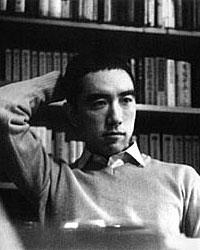 At the end of The Decay of the Angel, the last volume of The Sea of Fertility, Mishima turned the entire series upside down, a single, blinding burst of prose undermining the very foundation of all that has gone before, a stunning plot-twist that the author pulled off brilliantly. Some reviewers suggest that committing seppuku immediately following writing such a passage is understandable—how could one continue living after writing something so brilliant?

The ending to The Decay of the Angel has been called possibly the most shocking ending in all of literature; it was followed by one of the most shocking endings of all real life—an author who vehemently didn’t want grow old or decline bowed out at the very top of his game, aged 45; following an elaborately planned yet guaranteed to fail coup attempt aimed at restoring traditional values to a Japanese society he deigned bereft of them, he committed ritual suicide, 25 November 1970.

“The whole of Japan was under a curse. Everyone ran after money. The old spiritual tradition had vanished: materialism was the order of the day. Modern Japan is ugly.”

Toshiro Mayuzumi, close friend of Mishima’s for twenty years, explained: “He was a man of action. His suicide death was an attempt to change the world, at least to spur it by alerting the sensible population to the inconsistencies surrounding postwar Japan, the Constitution, the Self-Defense Forces, education, moral decay.”

Friend, former follower and fellow novelist Yasunari Kawabata honored Mishima with the statement “a writer of [Mishima’s] calibre appears only once every 200 to 300 years.” Ironically Kawabata won the Nobel Prize for Literature two years earlier in 1968, the first Japanese to receive an award long expected to be Mishima’s.

His funeral was attended by 10,000, the largest of its kind ever held in Japan, and his commentary on the Hagakure—the moral code taught to samurai—immediately became a best-seller.

Mishima wrote in his diary “All I desire is beauty.” A dedicated body-builder, practitioner of karate and kendo master, he sought throughout his life to make himself more beautiful, and strong. He saw beauty as a form of purity which could also be realised through noble action, and death.