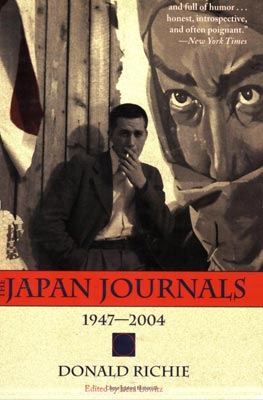 This is what every memoir should be. Unhindered by any attempt to be self-serving, Donald Richie’s The Japan Journals: 1947-2004 is about the most unflinchingly honest opening of the tightly turned lid of self you’ll ever read. You can’t help but like an autobiographer willing to welcome you this deeply into his 510-page heart.

Not that there’s a paucity of things to like about Donald Richie. One of the most underrated writers of the last 50 years, Richie wields his pen with a depth of insight that more famous writers would swap Booker Prizes for, and his command of detail and emotion are on par with the best—even here in a ‘journal’.

Although journal in name, The Japan Journals is more than nighttime afterthought, for Richie realised early on that the detritus of his daily life was destined for the shelves of others, and therefore wrote accordingly—with concentration and abundant skill.

Richie isn’t just an interesting writer—he’s an interesting human being, a person who has lived a life filled with fascinating and often famous others—Yukio Mishima, Marguerite Yourcenar, Emperor Hirohito and Francis Ford Coppola to name a few. Included is perhaps the most insightful assessment of the internal life of the near impossible to comprehend Mishima, while it is highly likely that Richie is the inspiration for Bill Murray’s character in Sofia Coppola’s Lost in Translation, for he tells of spending time with the teenaged director-to-be in Tokyo.

Better known as the leading Western authority on Japanese film, the beyond erudite Donald Richie could also be subtitled the ‘Gore Vidal who chose to live in Japan’. Equally talented and insightful as the American polemicist, Richie is more heartfelt to Vidal’s glib, and therefore on final reckoning, even more rewarding.