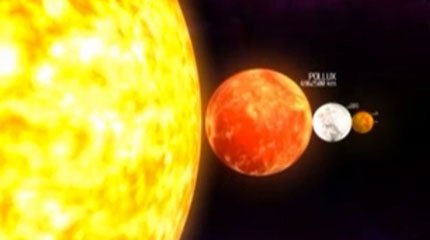 VV Cephei is an eclipsing binary star system located in the Cepheus (the King) constellation.

What the? First I write about rugby, and now astronomy? I’m not deliberately trying to antogonise my readership—strangely silent since my recent piece on oval-ball madness. Let me try and explain…

Binary star systems consist of two stars which orbit each other. Kind of like soul mates, or eternal foes. The significance of binary stars to astronomers is that the relative rotation of each star allows them to precisely calculate their respective masses, and as we all know, astronomers like nothing more than a bit of calculator action. I do know this actually—I have a university astronomy paper to my name. But more on that later…

Binary orbits aside, VV Cephei A and VV Cephei B, or Tweedledum and Tweedledee if you prefer, are interesting because of their size. The Cephei twins, more big and little brother, red and blue respectively, are kind of big; VV Cephei B no smurf coloured slouch at approximately ten times the diameter of the Sun; VV Cephei A in fact one of the largest stars known, possibly the largest. Not just giant, but supergiant.

How big is a supergiant—astronomically correct term as well as accidentally cool moniker? In terms of our Sun, the foremost of the Cephi twins is 1600–1900 times larger, and 275,000-575,000 times as luminous. Were it located in our solar system, it would extend past the orbit of Jupiter and nearly to Saturn, and burns a fair number of candles, blazing into the night at 3300-3650 K.

Pretty big right? Incomprehensible even? If like myself you have a distinct aversion to the dryness of facts and figures, and a simultaneous desire to grasp reality between your fore-fingers rather than with the blunt pincers of your mind, have a look at the following animation, courtesy of Cycomedia.net, which illustrates graphically the relative sizes of a sequence of planets and stars, from the Earth and our Sun through to the supergiant VV Cephei A.