By way of where, why and how…

Sri Chinmoy was an Indian-born author, poet, musician, composer, artist, athlete and most of all spiritual master, who lived from 1931 to 2007, and was based in New York from 1964. He was my meditation teacher from 1995, and remains so to this day.

A Song of the Soul 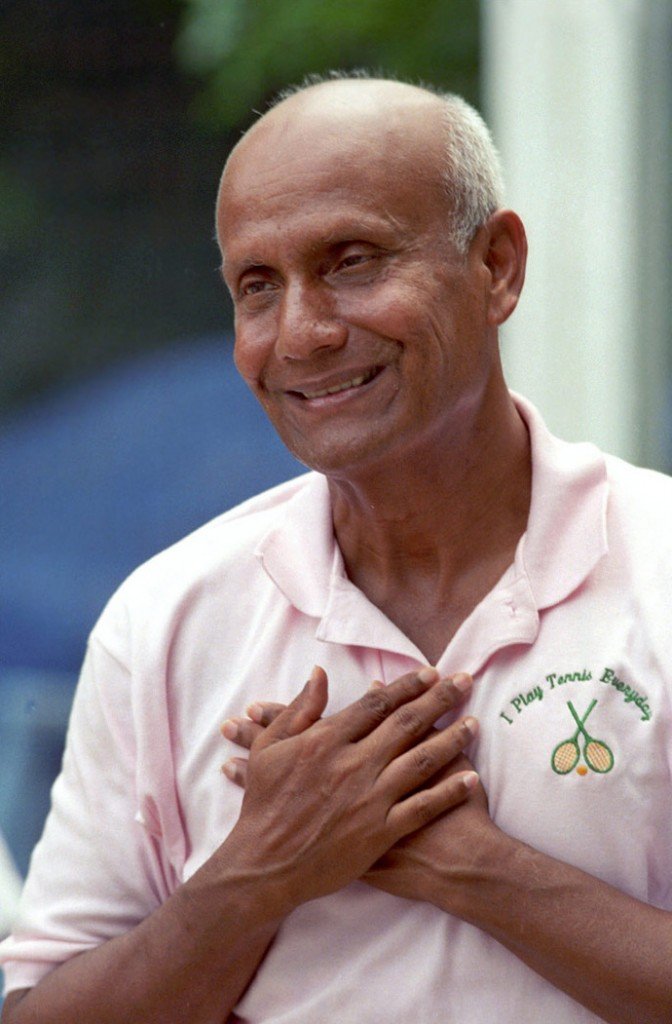 “I’m really glad we came to this concert” she confided to her friend. “We were lucky to get in.”

Still in her 20s, Greenwich Village hip with piercings and fashionably short, messy hair, she was as Sri Chinmoy might have described an Indian “with an ultra-modern touch”, yet here she was with 850 other New Yorkers to pay tribute to the India of tradition and yore, to spiritual master Sri Chinmoy and his music; many more stranded without tickets outside. The concert yet to begin, the hall already full, they were indeed lucky to be inside.

In the darkened auditorium of the Skirball Centre, the discernible buzz of excitement is replaced by silence, curtained by darkness as master of ceremonies and student of Sri Chinmoy for some 30 years, Devashishu Torpy, begins to read a prepared introduction from spotlit corner of stage. This could be the beginning of any of Sri Chinmoy’s Peace Concerts or Lifting Up The World ceremonies from the past ten years, except today is April 15th, 2008, six months after Sri Chinmoy’s passing, and the man being introduced will not be taking the stage.

We are attending the very first Songs of the Soul concert, the first “Tribute to the Music of Maestro Sri Chinmoy” as postured all over lower Manhattan, and body now departed, we are paying tribute to a spiritual master’s ever present soul.

A video is played, a brief outline of the Guru’s in no way brief achievements, and there is an audible gasp as the possible to quantify, impossible to equate or understand raw, powerful, unbelievable numbers of Sri Chinmoy’s lifetime scroll across the screen. 800 concerts just like this one, 1,600 books, 21,000 songs, 117,000 poems, 150,000 paintings and 16,000,000 bird drawings! None of these achievements are brand new or unknown—students of Sri Chinmoy have been proudly proclaiming to the world these astronomic, mortality-challenging figures for years, in press releases, faxes, newspaper articles and freely given meditation classes, and yet people in this darkened auditorium are saying with true wonder, as if for the first time, “Just who was this man?”

Sri Chinmoy is not yet known the world over, but it seems sure as the rising sun that he one day will; that the message, the light of this 21st century spiritual luminary, will one day shine.

From the humblest of beginnings—an orphan at the age of eleven, raised in a tiny East Bengal village and then a little known spiritual community in the southern Indian city of Pondicherry—Sri Chinmoy bestrode the world stage in every field he chose to draw, paint, write, compose, sing and perform upon.

This ceaselessly active spiritual master and true Renaissance man would often relate how as a youth his only desire was to become a great athlete, but it is not every youth who achieves self-illumination or God-realisation at the age of 12, and it seems that God had greater plans for this one-time teenage decathlon champion:

My body desired to be
A great runner.
But God has made me
A God-lover.
—Sri Chinmoy, The Golden Boat, Part 8

In the very heart of democracy—America—and in the very heart of America and 20th century heart of the world—New York—from the ages of thirty-three to seventy-six Sri Chinmoy practised and preached the democratic ideals of American sages and seers past. From his humble Queens, New York home, Sri Chinmoy embodied and expounded perfectly Ralph Waldo Emerson’s “Democracy of the Individual” and Walt Whitman’s “Democratic Vistas”, but he did so always with sagacious eye fixed far beyond purple mountain majesties and enameled fruited plains, for Sri Chinmoy’s was the vision of not just American but world democracy, a brotherhood and sisterhood without boundary or border, all of humanity united in what he termed a “Oneness-Heart-Home”, from sea to shining sea. 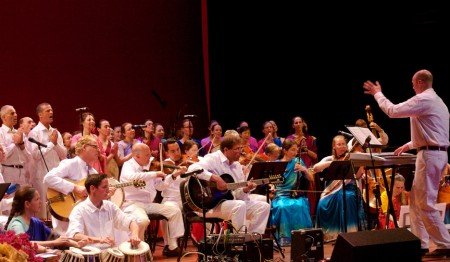 The concert continues, the Sri Chinmoy Bhajan Singers on stage, a woman’s music group formed by Sri Chinmoy himself, with members from over forty nations as if to perfectly illustrate the meditation-maestro’s vision of world-oneness. They play to respectful silence, their multi-coloured saris like jewels against the regal purple backdrop that could be a window to heaven, and heaven seems not so far when it is beckoned by the Bhajan Singers’ bejeweling, beatific tones. They finish to thunderous applause and leave the stage smiling, but seemingly bewildered, as if unsure of what to do in the face of a standing ovation.

I will not pass judgement on the musicianship of the next act, Gandharva Loka Orchestra, another ensemble of Sri Chinmoy’s international students—although to these untrained ears they were superb—but I will pass compliment on their unity and power—what a perfect demonstration again of Sri Chinmoy’s philosophy of oneness. Nearly seventy musicians and singers who do not normally perform together, thrown stage-wards with just a few days practise, producing such a profound, transcendent result. The beauty and power of so many working together for a single goal is surely the true power and potential of the human soul!

Throughout the crowd, cellphones and cameras are visible as audience members not only watch and enjoy the concert but record it—for posterity or the immediate ephemera of internet posting.

Sri Chinmoy, the subject of this concert of dedication and tribute may no longer be here, but he is present in spirit just as he always was, and many would say more strongly. The prevalent topic of the Sri Chinmoy Centre’s April Celebrations in New York—the yearly commemoration of Sri Chinmoy’s arrival in New York on April 13th, 1964 by his students—was how in this the first Celebrations without the meditation teachers’ physical presence, many felt his protection and guidance even more powerfully. After all a master of meditation is much, much more than just a human being—he is a master of that of which we are singing tonight: the limitless, boundless, ultimately infinite human soul. 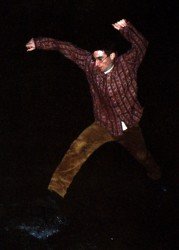 I first met Sri Chinmoy at another concert, thirteen years before. It was June 1995 and I was 20 years old, barely an adult and not really a man, yet in two decades on Earth desperately prescient of the need for somebody to shape and inform the spiritual life I felt—unlike any person, occupation or thing—unmistakably destined to pursue.

It was my fortune to turn seriously to meditation as the answer to the open question that was my life just as a Sri Chinmoy Centre was founded in my city—Wellington, capital city of New Zealand—and only two months after becoming a member, as if reeled to shore by some master fisherman, Sri Chinmoy himself came to visit, giving a Peace Concert in Auckland, then meeting the Prime Minister of New Zealand in my home town.

My first memory of Sri Chinmoy was his arrival at Auckland Airport. An hour spent waiting for the plane to arrive and then suddenly, as though noise-cancelling headphones on, the crowded arrival lounge was no longer filled by cacophony of migrating human souls, and a “presence”—a short, Indian man, only five foot seven, exactly the same height as myself, of medium build and latter middle age—walking past as if he was carrying the entire world. The room came alive by his being in it, brightened visibly, and for a moment it felt as if all the spheres in the heavens had paused, realigned themselves to the orbit of this suddenly hallowed arrival hall. Smiling, nodding, waving and blessing, he was gone within seconds, and the rest of my life had begun.

My first personal experience of Sri Chinmoy, first breath of the ever-shining love which would inflate, be the wind in sails of my just launched discipleship, came the very next day. Standing in a crowd of onlookers outside a vegetarian café dedicated to his spiritual philosophy, I struggled for a second glimpse of the man who was now the pole star and central mast of my life-boat—and struggled against being swept away by an unruly swell of fellow students trying to do same. Aghast at the unseemly jostling and pushing around me—fighting all as if for a few precious seats on a departing lifeboat—I retreated to a more secluded vantage point, island-haven of dignity and calm. ”I don’t need to jostle like a fan at a rock concert to see Sri Chinmoy” I told myself, pride somewhat ruffled, “a spiritual master can see all inwardly, and despite the fact he may be looking anywhere but at me, that is where he truly will be found.”

That is precisely where I first found Sri Chinmoy. Standing alone, on the side of an unremarkable city backstreet, jettisoned between rubbish bins and passing shoppers, barely able to see my spiritual teacher as he departed in the back seat of a car, I nonetheless felt him look at me, felt Sri Chinmoy glance inside me then through me, look right to the depths of my heart and soul even though I could not see his face. In a fleeting second, less time even than it took his car to pass, I felt accepted and embraced by a person who wordlessly understood every fibre of my being, understood every rhyme, reason, question and answer that might fill the pages of the book of my being and life—whether already written or yet to be—and was nothing other than love and compassion for all, for every single line.

I was not one who had a lot of outer contact with Sri Chinmoy—the number of times I spoke to him I can count on one, maybe two folded, prayerful hands, but Sri Chinmoy would have been first to say that the inner relationship between a spiritual master and student is infinitely more important than that outer:

All real spiritual Masters teach meditation in silence. A genuine Master does not have to explain outwardly how to meditate or give you a specific form of meditation. He can simply meditate on you and his silent gaze will teach you how to meditate. Your soul will enter into his soul and bring the message, the knowledge of how to meditate, from his soul.

—Sri Chinmoy, The Master And The Disciple

In silence, from across oceans vast and with presence near, during regular, twice sometimes thrice-yearly visits to New York, Sri Chinmoy changed, radically transformed my life, turned me upside down and right ways up, as if darkest night into brightest day. Studying meditation with Sri Chinmoy was as though the book of my life was shelved, my life story completely rewritten—with his pen sketched anew.

Creativity, confidence, peace, poise, energy, strength inner and outer, wisdom and love—all of these things I now possess in quantities far greater than I once believed. It is as if the self before I began to practise meditation with Sri Chinmoy was a caricature; the self I am now a masterly self-portrait—a painting, or a song, of the soul.