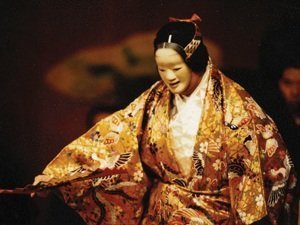 Each note, each word must be savored, weighed, calculated, and then put again into context; the context and never the word alone creating the image.

It is not impossible to read the Noh as literature, but it is difficult. It requires the kind of imagination essential to anyone who sits in complete silence and reads a score. It also requires a like amount of skill—whether the text is translated or not. Going to the Noh in Japan is very like going to a chamber music recital elsewhere. Many have the text open in their laps. Since the language is so obscure, the delivery so slow, the syllables so drawn-out, most Japanese could not otherwise understand a word. Even with the text, as with the score of a Schoenberg quartet, one must study it both before and after performance for the subtleties to become apparent. The pleasure lies in comprehending the form, in discovering the retrogrades, in uncovering the canons; or in tracing the allusion, in understanding the ambiguity, in finding the richness of the associations. The text of Noh is a collection of poems, some by the author of the play, some not; it is a repository of popular songs of the day; language and often action turn on the pun, the pillow-word, the invented portmanteau, pivot-words, conceits. Reading Noh is like reading late Joyce, like reading St. John Perse, like reading Webern. Each note, each word must be savored, weighed, calculated, and then put again into context; the context and never the word alone creating the image. Noh defies translation, as Chinese poetry, as Donne defy translation. Properly, Noh should include two pages of commentary for every two lines of text. When Hagoromo dances for her robe and sings of the heavens, she does much more than just this. What we are given is a created cosmography in which float bits of T’ang poetry, pieces of earlier Japanese, traditional refrains, and transient songs of the day. The language turns, convolutes, rears back upon itself. A near approach is Middleton, Webster, Ford; or, in Shakespeare, the echoing poetry of Measure for Measure, the subjective rant, all association, of Thersites in Troilus. The language of Noh is like music of the Elizabethan period, like the parade of reminiscences—controlled but seeming not—in the Cries of London; like the drinking-rounds and canons, cunning and lapidary. The Noh is mannerist drama.