17 Mar On Journeys Through the Australian States 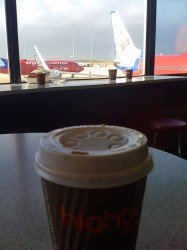 Travelling. Again. In Melbourne Airport, for four and half hours, but not my final destination, or even second to final in this marathon, budget airline leapfrog across the Pacific, Tasman and Indian Oceans. I am in an airport café sipping the oh so treasured caffeinated chocolate beverage I swore yet again to give up. And shall swear again, once the well of heart-quickened words dries, trails to a final period, final drop of coffee swallowed at the end of this page…

I am flying to Bali today, a Christmas holiday come a month late but not a moment too soon. A break from work and yet more work, a break of some considerable force to my cheerfully forgotten, paid just on time bottom line. Work to live or live to work? In truth I would prefer neither, but forced to choose I am working to be alive, and right now is the time for living.

It is not such a bad place to be stranded, this sun-burned, lucky land. I have always liked Australia—more so than anywhere else on Earth save the United Kingdom, it is just like home—albeit a sun-drenched, sun-worshiping version of such. Hotter of temperature and temperament than New Zealand, it is our louder, brasher “across the ditch” own.

I admire the self-confidence and assertiveness here, rare in my home of birds that do not fly and single lone predator—the Katipo spider, a pint-sized beast of passive-aggressive hostility at best, likely to bite only when pushed into corner or shoe. New Zealanders, more like the sheep who outnumber us twenty to one than killer spiders, tend to follow the herd, herd instinctively to the back of a pen. Like the damp, green pastures from mountains to sea, we are softer round surface and edge than Australians; we shrink from a person of loud, sure hand.

Australia has a vastness not just of its land, although perhaps learned of it; of wide open spaces and limitless, continental horizons—a vastness of heart and mind less sighted in smaller, skinnier isles. “Mateship,” the word for universal friendship between blokes really exists in Australia. The airport security officer who gave directions not with authority but airless amity; the student who made my coffee neither embarrassed to be serving me, or by way of compensation, haughty—such is far from common in less secure, narrow lands.

It took a while, several hours in fact, and all of the previous words, before untold Australian flags, t-shirts and hats of yellow and green led me to realise that today is January 26, Australia Day, the one day of three hundred and sixty-five that Australians take even more pride in being themselves than their unabashed norm. Serendipity has a way of following me around, especially when writing…

Salutation To The Soul Of Australia
My aspiring heart is saluting you.
My illumining soul is loving you.
In you I see the perfect combination of the
body’s service and the vital’s dynamism.
Your soul is at once the embodiment
of the ancient sun and revelation
of tomorrow’s dawn.
Your body’s consciousness is the expansion
of vastness.
Your heart’s delight is the perfection
of illumination.
Slowly and steadily your body walks.
Pointedly and unerringly your mind runs.
Devotedly and unconditionally your heart
dives.
Eternally and supremely your soul flies.
Your life’s greatness-dream is humanity’s
transcendental pride.
Your life’s goodness-reality is humanity’s
universal treasure.
—Sri Chinmoy, My Heart’s Salutation To Australia, Part 1.

During my first year of university, a time now so long ago tales of such begin increasingly to sound like they belong in the history books I read there, one of the highlights of each week was the student newspaper, more read by the student community than any tiresome book or text. I would in maturity and time end up working for this newspaper—my first ever graphic design and typesetting role, and my first ever writing—but for now, unaware of greater horizons ahead, I admired those vaster in others. In the writing of the editor and staff of this newspaper there was an assuredness of thought and pen that I, just out of high school not yet out of teenage angst, desperately, instinctively craved—an assuredness of self I sought the words for but could not actually name. Meditation would eventually provide that name.

That year the editor wrote the same editorial twenty-six times, every week of publication drafted different versions of the same theme—how to get to the end and find the words to fill his long past due, inspiration long past gone editorial. It was an editorial on writing an editorial if you will, and was often surprisingly funny.

Some fifteen years later I am reminded of this editor’s confident, stream of consciousness notes about nothing, for it seems I too am writing a story about writing a story—a feat I literally thought myself incapable of once upon a distant time.

Like running a race I expect this story will have an ebb and flow, tired and energetic patches, and in time, one foot and word in front of the other, a second wind. Then, hopefully and finally, second cup of coffee consumed, an end.

Hours are passing slowly, words less easily in this airport coffee shop, sitting in a corner surrounded by no-one, monopolising a power outlet meant not for laptop but lamp. My coffee is finished, once confident pen not so loud or bold, its flight near grounded and my plane, hours yet to board, not yet departed.

They say the most common opening sentence in blogging is “Sorry I haven’t written for a long time…” Is this the internet era version of every English teacher’s most hated closure, “And then I woke up”? I certainly hope, as my pen leans into a drifting doze, that unlike newspaper reading students in a university lecture, my readers are still half awake…

It’s a funny thing, the waxing and waning of creativity, writing’s ebb and flow. When you ”want” words they often do not come, for writing is a horse that can be ridden but not controlled, a ship to be sailed rather than boat to be rowed. Like meditation, you don’t “do” it—it is a state that comes to you when you forget to ”do,” cease to strive and struggle, control and command.

Becoming a good writer is often described as a process of finding your “voice;” an analogy to the meditative discipline of listening to the still small voice within. Like true meditation, good writing comes from a place deep within, beyond the noisy, scattered and often directionless voice of the mind.

So am I doing good writing? I hope so, but can a writer truly judge his own cover? Such is surely the prerogative of his readers, not pejorative of a caffeine-addled ego, and to know the answer to this question it surely would not hurt to listen longer to the writer’s voice within…

“We can listen to the dictates of the soul, or feel the presence of the inner voice, without being guided by a very deep meditation. Even in the hustle and bustle of life we can hear the inner voice, but if we meditate, then it becomes extremely easy to listen to the voice within. Without practising spirituality we may hear the inner voice, we may even see the soul, but we will doubt our experience. We will say, “This cannot be the soul; this voice is not coming from the soul.” But if we have a very good, deep meditation, we can hear the voice, we can see the soul with inner certainty.”
—Sri Chinmoy, Sri Chinmoy Answers, Part 13.