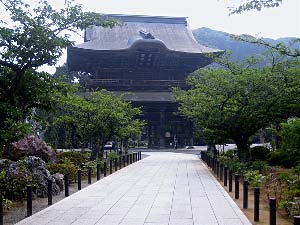 A visit to a Zen monastery in Japan, meeting with a monk, more similarities than meet the eye. 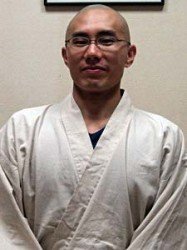 Hotel Mets, Ofuna, Japan. On the outskirts of Tokyo, a city that begins and then never seems to end. I am here on a whirlwind, week long visit with Sri Chinmoy and students, sharing a room with a friend already awake before dawn, his the unusual habit of beginning the day with a coffee. And I do mean beginning—before hitting the shower and immediately after hitting the bedside floor. Thoughtfully, hotels in Japan cater for the most extreme caffeine addiction, machines vending blackest gold located conveniently on every floor. And pretty much everywhere else for that matter.

In other places you might call this commercial opportunism. Like in my country, where ATMs are more prevalent on street corners than police officers; the cynic would reply that they are more profitable to run. I will happily admit that my glasses are green-tea tinted, but will argue from more than just a position of Nihon-bias that not everything in Japan runs to a profit motive; like the incense imbued atmosphere of a Shinto shrine, the air here is thick with a culture of sacrifice and service.

And sincerity too. Try asking someone for directions at any train station. Often unable to speak English, a person may not be able to help you, but certainly will want to help you. I was personally guided through three stations and multiple connecting trains to the very door of the Shinkasen bullet train by a local who did know English and was going my way. We exchanged business cards afterwards, but I value much more the sincerity of heart he offered me that day.

Examples of what could be termed the Japanese quality of thoughtfulness abound, like here at Ofuna Station, starting point for my journey this day, track-side platform pre-marked with lines approaching trains will sure as the rising of the sun come to a halt alongside, each and every sliding door precisely aligned. Perhaps more accurately one could call this trait “mindfulness;” it is as though the practise of Zen Buddhism has entered the national bloodstream.

Do I have time for a coffee from a station vending machine only feet away? Where there is a lack of will it seems there is always a caffeinated way, Suntory Boss: World Executive Blend, served ice cold this humid, mid-summer morn, can bearing moustached emblem not unlike a youthful Fidel Castro. The boss in question perhaps, or was something ‘lost in translation?’

As in all countries civilised enough to believe in the value of society over the primacy of individuality, the Japanese Rail system is a pleasure to use. Clean, swift and punctual. But as I may have already intimated, it would be hard to imagine Japan any other way.

The train journey to Kamakura from Ofuna is two stops and barely five minutes. A short distance in truth, but uncomfortable humidity and sense of urgency have already declared it too far to walk. Swift and punctual is my express aim; an appointment with friend and Swiss-German cameraman, fellow contributor to online podcast my must-not-miss imperative. Said cameraman has made one point more than clear to this occasionally absent-minded presenter: lateness is a cultural no-no here in Japan as well as Switzerland, where trains to even the most remote alpine villages are said to run on time. Being dilatory is not a usual quality for me, but sensitivity to being lectured just may be, so I took the diatribe in typically Japanese fashion—polite, silent stoicism.

United outside Kamakura Station in full morning rush hour, we embark on foot to Kenchoji Temple, first Zen temple in Kamakura and founded in 1253, later pioneer of Zen Buddhism throughout the whole of Japan, with intent to film an episode of Inspiration News, permission gained by phone to interview a monk about his practise.

The road from the station to temple is lined with vending machines, glass enclosed temptation so prevalent you could navigate at night by confectionery-lit glow. The road is passage for tourist pilgrimage rather than devoted darshan these days—one million tourists a year and obviously thirsty; but seven hundred years ago the entire nation orbited around this site, the Japanese Shogunate centred in Kamakura, Kenchoji its most important temple. The Rinzai Zen sect with some 500 branch temples was here overseen; seven main buildings, 49 sub-temples and at least one thousand people. 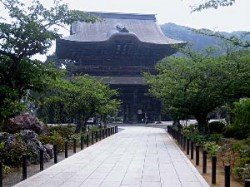 The first priest of Kenchoji was Chinese, not Japanese, Zen master Priest Doryu Rankei (1213-1278) of Zhejiang Province near Shanghai, invited as founding priest by Zen devotee and fifth Hojo Regent Tokiyo Hojo (1227-1263), patron and founder of a temple no local at the time was sufficiently qualified to officiate. Of the entire complex, only the Bonsho or temple bell stands from the year of founding, numerous fires and an earthquake in 1293 having damaged or destroyed every other structure. Designated a national treasure, it weighs 2,700 kilograms, and is too fragile to be tolled except on New Year’s Eve, when it is rung only 18 times instead of the traditional 108.

Entrance to the Hojo or Chief Priest’s quarters begins with a large foyer lined with shelves for shoes. The interior proper begins past this point, floor raised about six inches, obvious differentiation between areas where shoes should and should not be worn. All aspects of the interior bespeak of perfection; of the stillness and clarity of the states of concentration and meditation. Lines are perfectly straight, lacquered black beams to finely sanded and then polished wooden floors.

The meditation room is to the left, entry forbidden to visitors except between 5.00pm and 6.00pm on weekends, an hour long zazen or sit-in meditation open to laity, but the sliding doors are open, temptation to disappear into nothingness inside. Everything is still and perfect here, and familiar in a way I can’t place in memories living. I am quite disinclined to continue with the official reason for our visit—the reason for mine has already been met.

We are led along a spotless, paper lined wooden framed hallway to a small room, offered seats on a contemporary style sofa in front of a traditional style Japanese low table. Although my companion did phone the day before to arrange our visit it transpires that no one here is familiar with our purpose—the filming of a monk and his practise, and there is ten minutes of polite consternation as a succession of people enter and leave the room with questions, whispered conversations apparent outside.

In the end we are told that filming will be possible, but only for a ¥30,000 fee, a fee unable to be waived no matter how pure non-profit motive. Talking however is without charge, and seeing as paying for a filmed interview is beyond our non-existent budget as well as beliefs, we settle for this, questions to be asked by myself and translated by friend brought especially for the purpose, cameraman now largely redundant. The interviewee monk’s minder, an officious young man of powerful build, obviously the senior, although not in apparent spirituality, leaves the room without payment, signal for the interview to begin.

Mr Nagai-san, as the adept opposite us introduces himself, is a Zen monk of ten year’s practise and almost thirty years old, virtually the same as myself on both accounts. His father was a priest but gave his son the opportunity to choose a career life; like his father, he chose the spirituality and discipline of the monastic life instead.

I ask as to whether he has aspirations, whether in time his duties will change, position or responsibilities raise, the unspoken question whether he might one day achieve a position of responsibility like his father, but he appears slightly offended at implications unintended.

I laugh and apologise, “I certainly did not mean any offence!”

He tells us of the typical daily practise here in the monastery, an existence of simple chores and spiritual activities. Practise, in the widest sense of the word—for all activities undertaken in the monastery have a purported spiritual purpose, begins at 3am and finishes at midnight , and consists of cleaning, gardening and cooking, meditation in between. We are all amazed at the austerity and intensity of such an existence—I for one barely function on six hours a night.

“Does Mr Nagai-san only sleep for three hours a night?”

“When Mr Nagai-san is ready for this, then yes” is his reply. We are unable to get a more direct answer on this topic, returning again and again to variations of “One who follows the teachings of the Buddha will live in this manner.” It appears that three hours of sleep a night is his ultimate goal, but progress towards and readiness for such a level of discipline is judged by others; it is probably dishonourable for him to pass further comment on his own status in this respect.

We continue talking for a while, telling him of our own meditation practise as members of the Sri Chinmoy Centre, like tradesmen swapping notes, all the while sipping green tea provided and nibbling discreetly on sweetened rice crackers, trying our utmost not to lose a single crumb on the spotless floor.

It is somewhat uncomfortable to be asking questions of him so directly, even though such a practise is standard and in fact required of the form of journalism we are engaged in; for me at least, keenly felt Japanese sensibilities dictate a discussion of polite pleasantries and shared affinities, a circling of the outer edges of but never crossing boundaries unspoken of acceptability. You could say, as we sit asking questions of this monk, that I am indulging a personal affinity with his lifestyle quite unnecessary of words.

Many years ago at age six I was allowed to choose for myself a book on an occasional outing to town. I choose a picture book on Japan, a children’s travel book full of descriptions and photos, a kind of A-Z of the land and it’s culture. I would read this book over and over, staring for hours at the photographs of a people and land strangely dear to my heart, pictures of bath houses, bullet trains and samurai warriors jostling with stories of seppuku and juken jigoku (examination-hell) for centre stage in a lively imagination.

At age seven I began karate lessons, at my own insistence and pacifist Mother’s reluctance, and was soon counting from one to ten over and over in Japanese while performing endless exercises and very occasional martial arts; “praying to the Lord Jesus” as instructed by fearful Mother during the several minutes of silent meditation at the beginning, ostensibly for my own spiritual protection but in truth welcome distraction from the impossibly hard task of wrestling to stillness writhing thoughts. Seeing the same robes I used to wear on these temple bound monks brought all this back to me, and something more, a deeper familiarity that was the originator of my Nihon interest, then and now. Only rice-paper thin proof of reincarnation perhaps, but were I to have more it would be very un-Japanese to share…

Interview over, we depart with smiles and bows. We all have planes home to catch this day, but for me at least it is a farewell without sadness—I have found a second home, as much inside me as beneath red, rising sun.