04 Jan The Language of Humility

Honorifics and keigo in Japan—the language of politeness

Different from the major Western languages, and a further refinement of the systems used in other Asian languages, Japanese has an extensive, complicated system of honorifics—keigo—to explicitly express politeness, humility and formality.

Relationships are seldom equal in Japan, and the grammar employed in any given context is dependent upon a complex combination of factors such as age, gender, job and experience of both the person speaking and person spoken to. Simply put, speaking to one of higher position requires a polite form of speech, while speaking to one lower dictates a plainer form. Intent also plays a role—when asking for a favour humble language is expected, and previous favours done or owed dictate a requisite humility in language spoken. 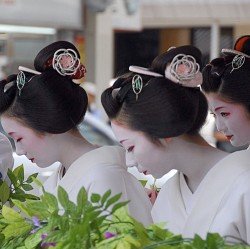 Strangers, even when not familiar with rank or position, also will usually speak to one another politely in Japanese, using a neutral language middle-ground if a difference in status is not immediately apparent. Women generally speak a more polite style of language than men, and use it in a broader range of circumstances. Interestingly, in Heian Japan, a period approximately one thousand years ago, not just language but handwriting was gender-specific—women were confined to the hiragana script, with its rounder, so-called “feminine” edges.

Other Asian languages do employ honorifics, for example Chinese, Korean, Vietnamese, Thai, Burmese and Javanese—all with exalted terms for others and terms humble for self, but the Japanese system is by far the most complex, a simple sentence capable of being expressed in more than twenty different ways, dependent on the context of speaker and spoken to. Unlike other languages, Japanese honorifics alter the level of respect or humility based upon context as well as the person spoken to or about. For example, when talking about a company president inside the company, exalted terms are used, but referring to the same person outside the company requires humble language.

The relativity of keigo is in sharp contrast to the Korean system of absolute honorifics, where the same register used regardless of the context or relationship of those speaking. Translated verbatim in Japanese, the Korean language comes across as extremely presumptuous; the perfectly acceptable “Our Mr. Company-President” in Korean totally inappropriate if used “out-of-group,” or outside the company, in Japanese.

Keigo is not learned in Japan until the teens, a time when one is expected to begin to learn to speak “politely.” This is partly due the complexity of the language and its honorific forms, although no doubt some would suggest that the rudeness of young is a universal trait. New employees are frequently sent on courses by employers to refine their use of honorifics, and it is not uncommon for even university graduates to have not completely mastered all the polite forms of the Japanese language.

In recent years some Japanese companies, in the face of a long economic slump, have attempted to abandon keigo in favour of a more open, hopefully competitive culture; parents often no longer emphasise honorific language to their children, and most schools no longer expect its use in the classroom. The result is that many young people in Japan today have a poor understanding of honorifics, and feel little compulsion to use them.

No doubt ardent writer-patriot and master of the Japanese language Yukio Mishima, along with every other long-dead champion of old Japan, will be spinning in his grave.