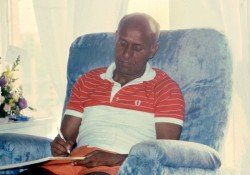 Thrift stores, cheap chocolates and masterpieces by Van Gogh and Cezanne—so begins the 16th edition of Inspiration-Letters, magazine style forum for inspired writers of the Sri Chinmoy Centre. A fitting beginning it is too, for all the authors are koan-carrying members of a meditation group espousing a philosophy of merging the heights of spirituality with the here and everyday, and what could be more lofty and lowly than the two masters of post-impressionism rubbing shoulders in a one dollar shop? All the world may well be a stage, and we the players therein, but some of the sets are truth be told, less than top-drawer.

The Inspiration-Letters editor, in possession of red pen and hugely discounted bargains, proceeds to the check-out, continues his introduction:

“As the cashier was checking me out, I happened to glance at her name tag: ‘Karamvir’ it said.

So ‘Karamvir’ means ‘she who is the master of her destiny, the one who is victorious over her fate!’

Apparently she had never thought about the meaning of her name before, so she just nodded, smiled shyly and handed me my merchandise.” 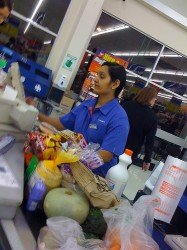 I am reminded of a supermarket closer to home, where checkout operators are likely as not to be Indian, lowly in station but sweeter in nature than the most expensive chocolates, and names hand-picked from the loftiest spiritual literature. While shopping for bread and milk I have been charmed and served by the entire pantheon of Indian goddesses—Saraswati, Lakshmi and Durga included.

The topic for this latest issue of Inspiration-Letters is “Destiny”, and it was the destiny of seven writers and myself to contribute, stories all of the moving and workings of nature’s most mysterious force—fate, and its invisible hold on our lives.

Home Is Where The Heart Is

Inspiration-Letters opens with top-drawer writer Sumangali Morhall’s Home Is Where The Heart Is, a tale of time spent in Thailand and the titular lesson learned: home is where the heart is, no matter where mind or body may roam. Sumangali is a master of poetry and lyricism—her gentle evocation of landscapes inner and outer sing a tale of destiny as sweetly as a nightingale’s call, and moved one reader to comment “no one describes nature better than her. Her description of monsoon rains will rise like steam in your memory every time you get caught in heavy rain ever again.”

“I arrived at the start of monsoon. From a veranda I would watch the sky as it jealously gathered navy blue cloud with long grey fingers, until its arms could hold no more, and the whole hoard was spilt on the earth at once. The traffic thickened and curdled, borders between road and path were eaten away by hungry torrents, where sandalled feet sloshed towards any cover they could find. It was at those times I liked to go for a walk.”

Alaskan Palyati Fouse weaves in It Is Written the working of destiny with film of the moment Slumdog Millionaire, and recounts a recent discussion with someone described only as a genius:

“I had a lengthy discussion with a genius recently about destiny. I asked many questions because, at first, I did not agree with what he had to say.”

I for one am highly curious to discover the name of the genius, for it is not written. Perhaps he is unnamed deliberately by the author, lest lost sheep like myself beat a grassy path to his isolated mountain top.

Telling of living alone like a beacon in the dark, just her and destiny on the uppermost edge of the American continent, Palyati talks and inspires with her account of swimming against the spiritual tide, and deserves more than just the respect of some distant shaper of destiny in doing so.

There Was A Child Went Forth

A reader of my own story, There Was A Child Went Forth—title lifted directly from Whitman—commented that he found me to be a good writer, but my stories somewhat depressing. While not ego-shattering, his feedback was certainly unexpected, and from far enough left field to make me pause and reflect. Am I a depressing person; is there less joy in my writing than there should be; in my life as well?

“The journey from child to man is said to be a passage, but for me childhood and adulthood were separated not by distance but a straight line, worlds cleaved apart as if by sharpest knife.”

There is a simple answer to both question and self-doubt—the true story of my life is a tale far more intense than any written. The experiences I went through before joining the spiritual life were more harrowing than any yet related, and while as prone to exaggeration as any writer, in the case of my own backstory, I am not writing larger than reality.

With admirable honesty, Palyati Fouse in It Is Written follows the very same thread:

“Recalling life experiences and my reactions to them before joining this path makes my stomach knot up. There is nothing for me there in the deepest sense. It is the continual inner urge to progress spiritually that keeps me alive.”

Destiny may at times be a blunt instrument, but none can deny the necessity of its scalpel-like role, its work and operation, through trial and tribulation, needed for our ultimate good. Yes this is an intimidating truth, but it is one anything but depressing, for it speaks of perfection, promises a happiness never-ending.

In Magical Mystery Tour, professional writer and published author Noivedya Juddery tells of his new preoccupation as film screenwriter, and how the casting of a young aspiring actress really is an act of destiny. At times a treatise on the millennia old debate on determinism, Noivedya writes and winds to the conclusion that life is the greatest mystery tour of them all.

“Occasionally, airlines and tour organisers speak of mystery tours, for which adventurous travellers pay for a tour to a place unknown. It might not be where you wanted or expected to go, but you will hopefully enjoy the destination. Life, of course, is the greatest mystery tour of them all – and however much you might influence your pilot, you never know where he will take you.”

How I Came To The Spiritual Life

“The speaker was a Belgian man of about forty years, exuding a marked inner poise. As soon as he started speaking my disappointment vanished. He talked about a spiritual life, a life of peace, love and happiness and the ways to bring these qualities to the fore through meditation. The man was very nice, humble and likeable. And his words were like music to my ears.”

Courageously, Abhinabha shares two dreams of Sri Chinmoy which convinced him to become a full time student of meditation, and concludes that he guesses it was destiny. For me there is no guesswork in this convincing, inspiring story.

Some Thoughts On The Way Forward

In Some Thoughts On The Way Forward, Jogyata Dallas waves the banner and writes a ringing call to arms on karma yoga—the yoga of action and work, and his forceful words are like an Emersonian edict for a new spiritual age. Jogyata is at his best writing of nature inner and outer, poetically intertwining the idyllic landscape of Bali with the sometimes smooth, sometimes rocky contours of the human soul:

“Horizoned and other-worldly, magnified by haze, the grey pencil sketch of Mt. Agung soars up to improbable altitudes, its ragged bulk cloud-garlanded, mysterious and remote from the far-below, scrambling destinies of man. Beyond the shoreline grey skeins of wrinkled seas crest and break—long ocean rollers at their journey’s end. Away from our usual melodramas, Bali’s peace and languor and the heavy gravity of the afternoon conspire, press you down supine.”

Mahiruha Klein writes in Overcoming Destiny of his first personal message from Sri Chinmoy, and of the message received the very eve of his Guru’s passing: “Hope is sweeter than the sweetest. Sweeter than ambrosia.” Chasing hope like a bee to nectar, Mahiruha is all parts sincere and heart-felt, and his words possess the silent width and weight of the best, other-world inspired writing.

“That was the last time I ever saw Sri Chinmoy. He passed away the following morning, quite early. But his last words to us, that hope is sweeter than ambrosia, touched me deeply. My Master told me in that phrase to keep a positive attitude, to stay happy and well, and to remain hopeful. Sri Chinmoy’s first message to me was to forswear anxiety about what people think of me or how I am judged in the eyes of society. His last message to me was to keep hope alive forever.”

In my case, it is tempting to dwell upon the fact that I had few personal messages from Sri Chinmoy, but like doubt itself this is the path and fiat of a false, never profitable coin. I was one of Sri Chinmoy’s students who had very little outer contact with him—I can count literally on fingertips the times he spoke to me—but to flail now for what will never be would be to miss totally an inner contact that has always been. I can write books of all the messages that have come in quiet moments and dreams, and it this inner communication that is the true currency of spirituality, a wealth of heart and soul that can never be spent, now or when the flickering flame of human life finally burns out.

Again where doubt is concerned, memory is without doubt the quickest, easiest to reach for antidote, and I need look no further than my own submission to Inspiration-Letters to be reunited with Destiny’s eternal, inner communion:

“I remember a vivid dream not long after I returned to New Zealand, of a most beautiful young woman who took me to house where many people were meeting, and above the head of each a small, shining speck of light. The woman, whom I instantly felt a deep, wordless love for, explained this point of light as the soul. Her name may well have been Destiny, for that was what I found upon joining Sri Chinmoy’s path.”

There is a sense now that we students of Sri Chinmoy are swimming in lonely seas, all coming to terms with a sudden, unexpected change of course. But how much and what has changed, and what exactly has been lost? In vanishing from sight it can be said that the boatman has merely charged garments, shed his human appearance to become the ocean and sea itself. In staying the course and continuing to sail, even though upon seas uncharted, are we not in the heart of where we have always been? In the Master’s boat. On board an immortal journey of the soul.