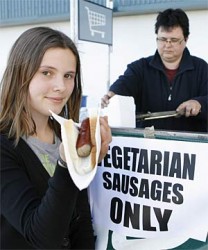 Here in New Zealand, where real men eat meat and real men are all you meet, vegetarianism remains the practise of people “with a sheep loose in the top paddock.” Or to lose the colloquial, in a game of marbles, the vegetarian would be missing a few.

Wooly in the head myself for the last thirteen years, I have lost count of the times carnivores have looked at me blank, uncomprehending; the queries of “but do you eat chicken, or fish?” constant.

About vegetarianism in New Zealand, the penny has yet to drop, and ends are yet to meet.

So it was about as surprising as a sausage wrapped in bread that the Christchurch Vegetarian Centre found themselves under the grill in trying to fire up a fund-raising sausage sizzle with non-meat sausages this week.

The selfless sizzle was booked several months in advance outside a large hardware store, a much sought after location, and management were told the sausages would be soy, yet on arrival a staff member informed the meat-free merchants of an unforeseen emergency—the public of New Zealand “needed meat.”

Meatless and proud, the group were only allowed to stay on the proviso they erected large signs warning of their vegetable contamination.

Frying up a storm in front of a sign proclaiming “Vegetarian Sausages Only,” Christchurch Vegetarian Centre co-ordinator Yolanda Soryl expressed her meat-free beef at their treatment:

“I was really shocked they (the hardware store) were so ‘anti’ trying something new. They told us customers would be really irate if they didn’t get their meat but we’ve had no complaints from customers and some people told us they came down especially to try some.”