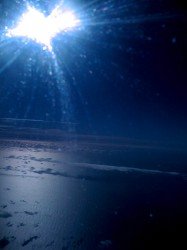 Out of the corner of my eye someone is waving to me. Out of corner of hearing, headphones on and music playing, someone is speaking to me.

Seat 23A, right next to the window, United Airlines flight 870 from Sydney to San Francisco, several hours in and several thousand kilometres into journey, I’m in a world of my own high above this world, listening to music while the Pacific Ocean shines, sparkles below.

“Excuse me, can you close the window?”

The man in same aisle, opposite row has caught my attention, silenced music’s refrain, redirected reverie’s wander with gesticulating hands and insistent tone.

I am perfectly happy with the window open, pleasantly lost in clouds passing and distant ocean’s flow, but I am a veteran of these cross-Pacific, daytime into nighttime and back again flights, time and significant money spent practising meditation twice-yearly with Sri Chinmoy in New York for more than a decade, and closing the shutter at start of movies or onset of nighttime is as routine as jetlag upon landing. So, on the off-chance I have missed an official announcement, and the by-chance that I am by nature an accommodating person, I draw the blind as requested, close eyes to a peaceful world below to keep the peace up above.

In Japan, “wa” or harmony, is considered important above all. What may be seen as lack of individuality or assertiveness from a Western perspective, in Japan is a long-studied, always conscious effort to keep the orchestra of society playing in tune. To a Japanese perspective, one’s individuality should not impact upon, should not detract from the freedoms and needs of others, and when it does, one breaks not only a social contract, but what is seen as the very law and fabric of the universe. In feudal Japan, sticking your head out so could on a bad day be enough to lose it.

“Ladies and gentlemen, we are sorry to interrupt, but could you please close the window next to you as we are about to start the in-flight entertainment service.”

Barbara the stewardess, with timing more perfect than drawling Californian delivery, enforces with public announcement what moments before I delivered unenforced. I don’t need to be instructed how to keep harmony; as though raised Japanese, despite being born over 5000 miles away, it is a private announcement I must always follow.

Blinds closed, lights dimmed, attention dims, movies follow movies but are not followed as I drift in and out of the comfort of a sleep that is never comfortable. Check watch, read a book, stretch legs and shift weight, don’t check watch and read a book again, force my mind into passing time as cabin night—no stars above, few stars on B-grade screens—less than willingly passes into day. What should be a first resort is my last; at last I meditate the time away.

Someone is tapping on my shoulder…

Strangely, in the extreme lack of personal space that is modern coach travel—air, leg room and body heat all one and shared—it is still a shock to be deliberately touched by the person shoulder to shoulder, knee to knee with for over half a day, and my eyes jerk open as though woken straight from a dream.

“Someone wants you to close the window”, owner of arms and legs says.

“What, why?” …first words to mind and then mouth as I scramble to remove headphones, leave stillness of meditation, gain my bearings. The lady sitting next to me shrugs, points to the aisle beyond.

“Can you close the window please?”

The same man as before, four seats across but not nearly far enough away, is gesticulating, motioning with up and down gesture to once more close the blind I had opened, movies now watched and half-forgotten, just a short while before.

Something within me disagrees. Something about the man disagrees. I will not be complying or accommodating him this time.

Two hours into flight, point of departure’s night yet to be flown through and movies yet to start, sure I’ll close the window. Two hours to go, breakfast about to be served and movies closed, no way, not a chance.

“Why?” I retort, not merely a question but forceful, deliberate challenge. ‘I’m happy with it unclosed,’ my unspoken, implied justification, ’and who are you enforce your will on all of row 23?’ Trapped between open window and wide open pride, I will not be backing down.

His face is turning red, and his voice, climbing above dull drone of aircraft engines, has reached a pitch approaching a whine.

You can tell a lot from a person the first time you see them—first impressions do not lie as the saying goes; first thought, best thought same adage by another name. This is what I trusted in challenging Mr 23E’s request—I followed my heart, acted upon what felt right at the time.

Woken from quiet reverie two times, face to indignant face a second time, with near blank mind and meditative calm, the part of my being that reacted so strongly was the right part, the trustworthy part: the plain, dependable truth of my heart.

‘His request is selfish and unreasonable,’ my heart spoke, ‘more about him getting his own way,’ its clear explanation. ‘He does this sort of thing all the time, do not give in to him’ the inner instruction, and in a flash, less than a single second, action right and response appropriate were decided, chosen without a moment for pause or consideration.

“I can see it just fine” I reply, calmly, strongly, a statement of truth, fact to take or leave rather than apology or excuse.

Trapped in his seat by more than buckle and belt, he squirms, searches to and fro, looks as if for Barbara the stewardess the come to his aid, but like his manners, she is nowhere to be seen.

“Humpf!”, 23E mutters in disgust, muted, half-beneath his breath. He turns away, defeated, harmony not I the victor over his inconsiderate demand.

I have put a bully in his rightful place, and I have put harmony back in her place, visible like the through window open, strolling freely up and down the aisle.

Sri Chinmoy taught that in today’s world it is no longer appropriate to turn the other cheek when wronged, keep the peace at any cost at all. Rather we must illumine ignorance when we cross it, and put wrongs right where we can, not as in an eye for eye and tooth for tooth, but by defending ourselves, staying the hand of one who would give us a slap. In turning not our cheeks, we prevent another from doing wrong, and slowly, action by right action, make the world a better place.

So we have to be very careful when somebody does something wrong to us. It is not that we are threatening them. Far from it. Only we have to feel that by allowing him to do the same thing again, or indulge in the same wrong action, we are taking him away from his own divinity.

At each moment, just as we should always try not to do anything wrong ourselves, consciously or unconsciously, we should also not allow another person to do anything wrong. We know that our encouragement of his mistake is in no way serving as kind of compassion. No. If we encourage him to do the wrong thing again and again, then this is not compassion. This is our self-imposed weakness in the name of compassion.
—Sri Chinmoy, Earth’s Cry Meets Heaven’s Smile, Part 3