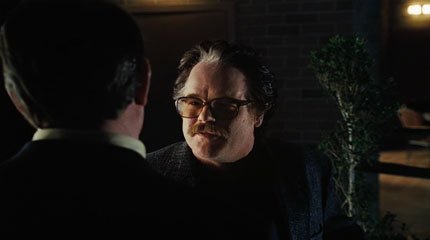 CIA Agent Gust Avrakotos (Philip Seymour Hoffman): Listen, not for nothing, but do you know the story about the Zen master and the little boy?

Representative Charlie Wilson (Tom Hanks): Oh is this something from Nitsa the Greek witch of Aliquippa, Pennsylvania?1

Gust: Yeah as a matter of fact it is.

There’s a little boy. Now on his 14th birthday he gets a horse, and everybody in the village says “How wonderful the boy got a horse,” and the Zen master says “We’ll see.”

Two years later the boy falls off the horse, breaks his leg, and everybody in the village says “How terrible,” and the Zen master says “We’ll see.”

Then a war breaks out and all the young men have to go off and fight, except the boy can’t cause his leg’s all messed up, and everybody in the village says “How wonderful”…

Gust: So you get it?

Charlie: No. No, cause I’m stupid…

Impermanence is at the heart of Japanese culture, and the Zen tradition with which it is intrinsically bound. In Japan, appreciation of art and life itself is informed with an implicit understanding of the true impermanence of reality, that we each are here today, gone tomorrow—we and everything else in this world.

Such an appreciation of impermanence sees a half clouded moon as more beautiful than one full, fallen cherry blossoms upon the ground more so than spring’s first bloom. As symbols, the clouded moon and decaying cherry blossoms both capture the truth at reality’s heart, and truth is infinitely more beautiful in Zen—and spirituality in general for that matter—than illusion or untruth.

When old age shall this generation waste,
Thou shalt remain, in midst of other woe
Than ours, a friend to man, to whom thou say’st,
“Beauty is truth, truth beauty,”—that is all
Ye know on earth, and all ye need to know.
—John Keats, Ode on a Grecian Urn, 1819

It is a pre-modern take on the Law of Entropy informed by millennia of inward reflection, no less valid because empirically verified by the experience of heart and soul. We don’t need a particle reactor to know that everything in this universe comes to an end.

“All men think all men mortal, but themselves.”
—Edward Young

In the context of Charlie Wilson’s War, this parable of the fleeting nature of reality is used to illustrate that today’s victory may be tomorrow’s loss, today’s loss tomorrow’s victory. It is 1989, and real life congressman Charlie Wilson has just seen has seen himself vindicated, his policy of arming the Afghani Mudjahadeen paying off spectacularly in the defeat and withdrawal of the Soviet army, a pivotal turning point in the Cold War. Yes it is a victory says CIA Agent Gust Avrakotos, but where will today’s success take us tomorrow?

Spirituality sees success and failure as obverse and reverse sides of the same coin, the coin of human experience which leads gradually, steadily and unerringly to the experience of true reality—the experience of truth with a capital ‘T’—the infinity, immortality and eternity of the human soul.

If I stoop
Into a dark tremendous sea of cloud,
It is but for a time;
I press God’s lamp
Close to my breast;
its splendor soon or late
Will pierce the gloom;
I shall emerge one day.
—Robert Browning

From a spiritual point of view to live only for success is as mistaken as to avoid failure at all costs; both represent a fundamental misunderstanding of the true nature of reality.

Understanding life from a deeper perspective, a perspective grounded upon truth requires a longer, broader point of view than the present moment alone, with its ups and downs, victories and losses, happiness and sadness, for success and failure all are equally valid, greater and lesser steps towards the self-same goal—realisation of the ultimate truth.

No Failure
No failure, no failure.
Failure is the shadow
Of success.

No failure, no failure.
Failure is the changing body
Of success.

No failure, no failure.
Failure is the fast approaching train
Of the greatest success.
—Sri Chinmoy, The Dance of Life, Part 13, Agni Press, 1973.

With parables by meditation teachers in film rarer than actual masters of meditation in real life, the quoting of a Zen koan in Charlie Wilson’s War alone makes it eligible as a “Beautiful Moment in Film”—whatever the quality (and it is by no means inconsequential) of the cinematography, acting or directing. How often are the words of the wisest listened to as avidly as those of the shallow? How often do we even make the distinction?

All too frequently the sayings of celebrity, beauty and power are writ larger in this world than their words alone justify; not frequently enough the words of the wisest listened to as avidly as those of the shallow.

One day the words of wise people may actually be worth more than the wisdom of ‘fools.’ I can’t wait to see the films made when that day arrives.

“Human life is limited, but I want to live for ever.”
—Yukio Mishima, final written words.