Skip to content Skip to sidebar Skip to footer
A Sensitivity to Things“Mono no aware”, the pathos, empathy, or sensitivity toward thin/gs and ephemera”, is a Japanese term for the awareness of the impermanence of things, and a gentle sadness at their passing.
childhood, funny, inspiring, internet, sri chinmoyJune 18, 2008

From Out of the Ether a Golden Egg 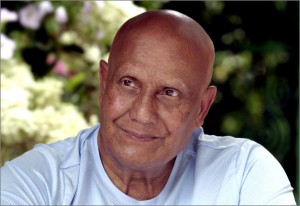 Sri Chinmoy by Pavitrata TaylorOne normally apologises when one has been inadvertently amiss in something, and recently I have been very amiss—my writing here at A Sensitivity to Things literally missing in action, very much to my own regret—for in its absence I miss writing like near nothing else. But how does one say sorry, sincerely and originally, when “I’m sorry I haven't posted for a while” is officially the most common opening sentence in blogging? More fittingly by writing something new in my opinion, making amends and righting wrongs by writing, jumping back on the horse instead of moaning its distant, departed form. For a while I had a Comment of the Week™ feature, a device which delivered a dependable, near ready to eat, half to fully baked with only a little heating or writing on my part, blog topic each week, but such a feature requires not just commenter but author too, the hen house absolutely necessary before discussion of chicken or egg can begin. Ex nilhilo nihil fit. Nothing comes from nothing. Well, the goose has laid a golden egg this week. A magical comment delivered to me, quite unexpectedly, out of the internet’s magic ether.

Pavitrata Taylor, self-proclaimed, self-evident “cheerful fellow,” is a photographer who recently started a fine site dedicated to his photography (including personal favourite pictures of meditation teacher Sri Chinmoy), and he revealed himself to have more than just a talented eye, talented pen leaving a comment of epic proportions in response to Thirteen Facts About Me As A Child. Well done Pavitrata, Commenter of the Week™—you can take it from here.

I was a cheerful fellow, for all that. Still am. 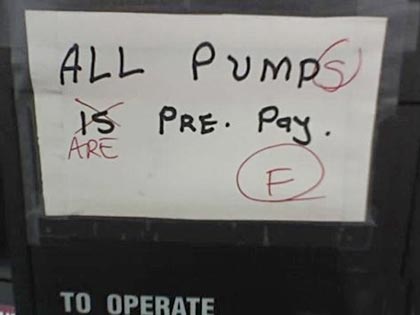 A visit to the barber in Turkey: flaming swabs, cut-throat razors and a little too much gel. 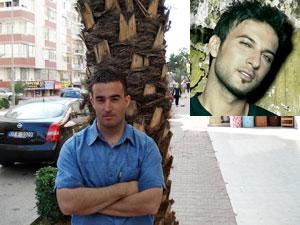 I have traveled all over the world in the last few years, an unexpected side-benefit of my full-time meditation-occupation. A more expected side-effect of the global search for a permanent natural high? Jet-lag, or to list its lesser known names: ‘desynchronosis,’ ‘dysrhythmia’ and ‘dyschrony’. Let me add one more by way of practical effect: ‘dysfunctionality.’ If I were an Apple Mac ("Hello, I am a Mac"), now would be a good time to plug me into a wall... The online encyclopedia, Wikipedia, lists the symptoms of “jet-syndrome” thus: How does one cope with jet-lag? Other than badly? As with many conditions medical consensus is far from certain, but there do appear to be a few general suggestions: So bar the passing touch of ill humour which jet-lag probably cannot in full explain, it seems that intercontinental travel has much to blame for my present “disruption of the light/dark cycle that entrains the body’s circadian rhythm.” And chanting “I am not the body, I am not the body” repeatedly during the Brahma-murta has done little to disavow me of this effect. What I probably need is a good meditation—if I could but stay awake...

Beijing says “Too much tricky” to Chinglish 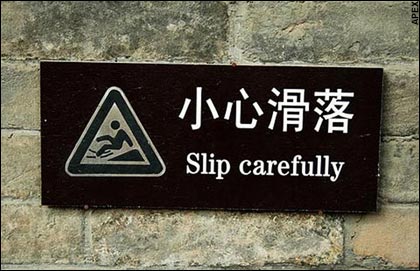 New stadiums, airports and trains—Beijing is fabricating Great Wall sized for this year’s Olympic games—but one part of the construction is several bricks short of full height: the signage. The hundreds of thousands of visitors—half a million expected in the Chinese capital officially—will find little relief in language from the countless signs erected on their behalf—other than the humourous kind that is—for the accuracy of many translations is firmly in last place; a gold medal likely for unintentional mirth. Giving rise to more than a sense of humour, the Beijing Municipal Tourism Board has thrown up its arms about many of the city’s bilingual notices, hiring English experts to eradicate the funny side, restore a stiff upper lip to countless “Chinglish” signs, restaurants and shop fronts. Feeling hungry during a frolic in the Forbidden City? “Burnt lion’s head” will no longer be an acceptable part of the menu. Yes, it is outrageously funny, and even in parts of Western Europe entirely accurate, but “Welcome big nose friends” will no longer allowed on the front of eating establishments. Likewise “Reception Centre for the Unorganised Tourist”—albeit probably true for most visitors, Germans aside. Want to go for a walk in Beijing’s ‘Park of Ethnic Minorities?’ Still a pleasant stroll in the inner city, but no longer a walk on the wild side, for in mistranslated, misunderstood “Racist Park,” you take your care and care for your wallet when the roads are wet: “the slippery are very crafty.” Doug Lansky, travel writer and author of Last Trout in Venice, laments the loss of the linguistically lacking from China, for in his opinion, signs on lawns pleading “don’t walk on me” reveal much about the Chinese way of seeing the world—perhaps a Jain-like sensitivity to the feelings of too-often trodden turf? Lanksy opines:

“On one hand I can understand why they are doing it - they don't want people making fun of their language skills or culture, but on the other hand, it's a real shame. The travelling experience should be a little bit quirky, and throw people off balance a bit.”

Too much tricky in there!

The last word on loose and fast words goes to a “Sylvia”—not her Chinese name—a co-worker of this author who recently described the business of doing business in China in perfectly plain Chinglish:

“Sorry about inconvenient. Remember this is in China. Too much tricky in there! My goodness!”

Credits Story misappropriated but not mistranslated from The Telegraph.
absurd, funny, musicApril 3, 2008

He’s been in the New York Times, the L.A. Times, the BBC and The Guardian, the pop star your Mum used to like now an internet phenomenon in the papers your Mum likes to read.

Rick Astley, baby-faced British two-hit wonder from 1988 still baby-faced and viewed 15,000,000 times on YouTube—somebody’s got to be “taking the Rick” for sure? The phenomenon is called “Rickrolling,” and if you just clicked that link you’ve been “rolled” as well.

To quote the Urban Dictionary, ’rolling is:

To post a misleading link with a subject that promises to be exciting or interesting, e.g. “World of Starcraft in-game footage!”  [...] but actually turns out to be the video for Rick Astley's debut single, “Never Gonna Give You Up.” A variant on the duckroll. Allegedly hilarious.

But what does Rick have to say about it all? You wouldn’t get this from any other guy...

For his part, Astley was nothing if not modest about his new cultural role. “If this had happened around some kind of rock song, with a lyric that really meant something -- a Bruce Springsteen, "God bless America" ... or an anti-something kind of song, I could kind of understand that,” Astley said. “But for something as, and I don’t mean to belittle it, because I still think it’s a great pop song, but it’s a pop song; do you know what I mean? It doesn’t have any kind of weight behind it, as such. But maybe that’s the irony of it.” Astley would never put the song down, mind you. It’s just that, as he says, “If I was a young kid now looking at that song, I’d have to say I’d think it was pretty naff, really.” (Wikipedia on “naff”: British slang for “something which is seen to be particularly ‘cheesy’ or ‘tacky’ or in otherwise poor aesthetic taste.”) “For me it’s a good example of what some of the ’80s were about in that pop sort of music way. A bit like you could say Debbie Gibson was absolutely massive, but if you look back at it now ... do you know what I mean?” Yes, I think we do. But even still, with all the renewed attention to his work and his — albeit 20-year-old — image, does Astley have any plans to cash in on Rickrolling, maybe with his own YouTube remix? “I don’t really know whether I want to be doing that,” he said. “ I’m not being an ageist, but it’s almost a young person’s thing, that.” “I think the artist themselves trying to remix it is almost a bit sad,” he said. “No, I’m too old for that.” Astley, who will be touring the U.K. in May with a group of other ’80’s acts, including Bananarama, and Nick Heyward, Heaven 17, Paul Young and ABC, sums up his thoughts on his unexpected virtual fame with characteristic good humor: “Listen, I just think it’s bizarre and funny. My main consideration is that my daughter doesn’t get embarrassed about it.” —David Sarno, L.A. Times 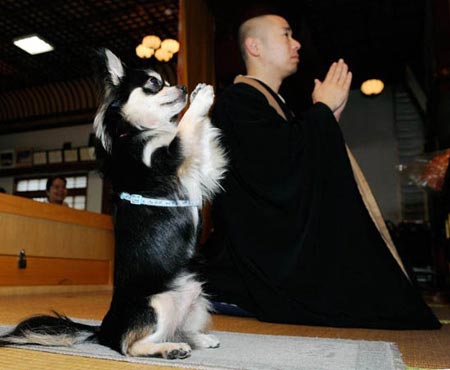 Meet Conan, a male chihuahua from Naha, Japan, who’s renounced more traditional doggy pursuits for Dogen—a formative style of Zen from the 13th century that equates meditation and enlightenment as one and the same—chasing after the ever-spinning shiny wheel of rebirth before he’s even taken human birth. Buddhist priest Joei Yoshikuni (pictured) of the Jigenin temple didn’t comment as to whether his own meditation practice had gone to the dogs...
Photograph: Toru Yamanaka/AFP