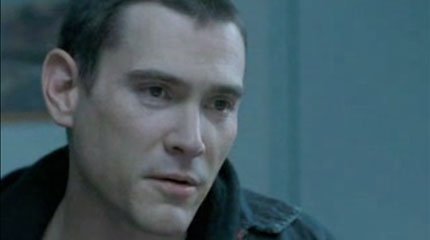 Rudy: That’s life Henry.
Henry: Yep.
Rudy: You know what life is?
Henry: Life is a horrible little giggle in the midst of a forced death march towards hell.
Rudy: No it isn’t.
Henry: An interminable wail of grief…
Rudy: No! Life is a single skip for joy.
Henry: (sigh) I know…

A realist, two feet planted firmly on the ground, looks down and pronounces that this, here and now, is life. A poet instead dreams of flight, and bravely leaps up into the air…

If life is a skip for joy it requires one to enjoy, remember the time we spend in the air, rather than dwell upon that spent on the ground. Or in the ground for that matter.

These are the Newtonian laws of happiness—the ipso facto necessity of optimism and hope instead of pessimism and doubt, for life is a cup both half-empty and half-full, poison-laced and nectar-brimmed, a meal we cook either satisfying or not by our very perceptions and attitudes.

Henry Roth (Billy Crudup) is a character who sees nothing but the landing at the end of life, the death awaiting him when his skip—more leaden-footed stumble—touches the ground.

Dedication begins with Henry as a realist, but his realism really an excuse for an all pervading, bleak without respite pessimism, a pessimism which, in an endless circle of causation, justifies his fear and perpetuates his misery.

Henry ends the film taking a leap of faith, dares blindly to hope against “facts” or “proof,” chooses no to longer look down.

A pessimist is he
Who shuts his eyes
To the rising sun.

An optimist is he
Who looks up and sees
Through the teeming clouds.

A realist is he
Who faces the clouds
And adores the sun.