13 Apr A Weekend with David Lynch 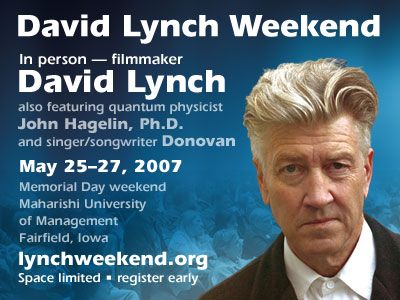 Bente Loevhaug, Project Manager for the upcoming David Lynch Weekend got in touch to let me know that, and the title is kind of a give-away here, David Lynch—as in the famous film-maker and perhaps not so famous meditator—is hosting a special weekend next month, subtitled“Exploring the frontiers of consciousness, creativity and the brain.”

Personally I’m not terribly interested in the frontier of the brain, but very much so uncharted vistas of consciousness and creativity—probably why I went to the trouble of writing a review of Lynch’s excellent Catching the Big Fish: Meditation, Consciousness and Creativity in the first place.

Iowa is a little off the beaten trail for me personally to attend, so in leiu of listening to David Lynch talk in person I’m going to settle for repeating a few choice words of his on meditation and creativity, topics dear to my own heart.

“I meditate in the morning and in the evening, for half an hour each time. I don’t know what my life would be without meditation and I never have missed one session anywhere. I’ve meditated every day for the past 23 years. It cleans the nervous system, which is the instrument of consciousness. Little by little, a person becomes a hair more aware of what’s going on. The bad things that happen don’t hit you so hard, and you’re not overpowered by success. Success can be even more dangerous than failure.”

“Well, you know, I’m a meditator, and the idea of that is to expand consciousness by clearing the machines of consciousness, which is the nervous system, and the greater the consciousness, you know… I think in the analogy of fishing, the deeper your hook can go to catch the bigger ideas. And its very important to get down in there. Sitting comfortably, in a chair, drifting off, not trying to manipulate what’s in front of you, sometimes you can drop into a beautiful area or bounce up to higher whichever way you want to see it into a beautiful area and catch ideas.”